The Scarborough Gift of Life Association visited the Scarborough and Rouge Hospital-Centenary site in April to raise awareness on how organ and tissue donors can save lives.

Through improvements to the organ donation system, the organ donation rate in Canada is on the rise.  More people are receiving the life saving organs they need but more work still needs to be done to better connect patients and donors. Read more at the Globe and Mail.

Ottawa Senators owner, Eugene Melnyk, launched ‘The Organ Project’ with the goal of promoting organ and tissue donation.  You can learn more about this philanthropic effort on Yahoo! Sports.

July 22, 2016
Promoting Organ and Tissue Donation at the Taste of Lawrence Festival

From July 8-10, 2016, Scarborough Gift of Life volunteers were promoting organ and tissue donation at the Taste of Lawrence Festival in Scarborough, Ontario.  Over the course of the 3-day event our volunteers interacted with thousands of residents handing out over 2600 brochures.  We engaged the community in an important and potentially live saving conversation about saving lives by becoming organ and tissue donors.  We also met organ recipients and residents who have already registered to be organ donors.

SGLA President Mohan Bissoondial at the Taste of Lawrence Festival.

According to the Toronto Star, twenty-one percent of Ontarians who registered to be organ and tissue donors before they died had their wishes blocked by bereaved family members last year. Trillium Gift of Life asks a deceased’s next of kin to reaffirm their family member’s wishes to donate their organs.  If the family says, “no” Trillium Gift of Life will respect the family’s wishes and the deceased’s organs will not be donated.

This is a perilous situation for Ontarians on the waiting list for an organ because they have to wait much longer for a life saving transplant, which increases their chances of death.  One organ donor can save up to eight lives.   Read the full article on thestar.com.

In honour of beadonor month, the Be A Donor flag was raised at the Scarborough Civic Centre.

The beadonor Flag Raising occurred on April 5, 2016 at the Scarborough Civic Centre.

The Canadian Transplant Games (CTG) is getting closer to becoming a reality.  In less than five months, Toronto will welcome hundreds of participants and supporters from across Canada, as well as our International friends to the 8th Canadian Transplant Games. For one exciting week of competition, camaraderie and celebration from August 8 – 13th we will celebrate our gifts and honour our donors.  Continue reading.

On March 19, 2016, the 18th Annual Chinese Health Information Forum was held at the Chinese Cultural Centre of Greater Toronto.  Scarborough Gift of Life attended this event to talk to the community about the importance of becoming an organ and tissue donor.  Being a donor saves lives and SGLA continues to work towards its goal of increasing organ and tissue donation rates in Scarborough to match the provincial average, which currently sits at 27%.

In recognition of the life saving work carried out by the Scarborough Gift of Life Association (SGLA) and its volunteers, SGLA received the 2015 Urban Hero Award for Scarborough in the Health category.  Since 2012, SGLA has worked tirelessly to improve organ and tissue donation rates in Scarborough.  This hard work is paying off because the percentage of donors has climbed from 9%-12% over SGLA’s first 3 years in operation.  Scarborough’s organ and tissue donation rates are below those of Toronto and Ontario so more work still needs to be done but the message that being a donor saves lives is being heard by the community.  Read this Scarborough Mirror article for more information.

Scarborough Gift of Life received the 2015 Urban Hero Award for Scarborough in the Health Category.

On Thursday April 15, 2015, Mohan Bissoondial, Coordinator of the Scarborough Gift of Life Association sent an Open Letter to all political leaders in Scarborough, on the occasion of beadonor month in Ontario to ask for their support in promoting organ donation and registration in Scarborough.  He appealed to  all political leaders to get involved and take a leadership role in supporting the Association’s goal of increasing the registration rate in Scarborough from 11% to 13% by the end of 2015 and to catch up to the Province’s rate of 27%.

In honour of Be a Donor month, the Be A Donor flag was raised at the Scarborough Civic Centre.

Trillium Gift of Life held the third Advocate Summit on March 1. The theme of the summit was Empowering Advocacy and a panel of speakers presented on advocacy in their organizations. SGLA was selected to present and Ramesh Nankissoor shared the history of our organization and the successes we’ve achieved.

SGLA was represented on the Summit 2015 panel. Click image for more Summit photos.

April 11, 2014
Scarborough far behind provincial average in registering to donate organs: Be A Donor flag to fly over Scarborough Civic Centre 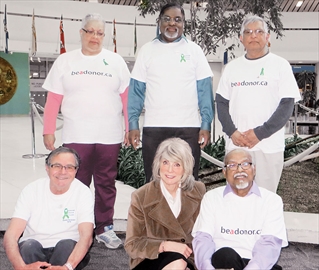 They are the evidence organ and tissue donation saves lives, but in this life-saving, Scarborough lags behind. Around 24 per cent of people in Ontario are registered to donate, and about 15 per cent across Greater Toronto. In Scarborough, the percentage recently climbed – to 10. Read full article Helen Farinha shows off the scar from her heart transplant surgery. Photo by Evan Boudreau

TORONTO – Shortly after immigrating to Canada, a then 25-year-old Tom Mirtrovski discovered his kidneys were failing. “I was extremely scared because I did not know what would happen to me (and) who would take care of my three kids,” said Mirtrovski, 67. “It was hard on my wife too because she was scared about what would happen to me.” At first Mirtrovski, who was put on dialysis, continued with his job at Canada Post but as time went on he grew weaker and weaker forcing him to eventually take a leave from work. After three years, Mirtrovski underwent the “life-changing” surgery. Read full article

Tissue donation doesn’t just improve lives – it can save them. Read this article

Scarborough Gift of Life Association has helped the Scarborough area reach the 10% goal for new registrations to donate. Check out the registration stats for the GTA.

Scarborough Gift of Life members went to St. Michael’s Hospital on April 17th and 18th in support of the BeADonor/123 event. This event was focused on promoting employee restration across the University Health Network, Sick Kids Hospital, and St. Michael’s Hosptial. Secondly, SGLA members made a presentation to the Rotarty Club in an effort to gain support in raising donor awareness. Thirdly, the SGLA members were represented at the Heart and Stroke’s 2013 Chinese Symposium on April 14th.

The Scarborough Gift of Life Association is supporting Scarborough General Hospital with their National Organ and Tissue Donation Awareness Week events. The events are ongoing from Monday April 22nd to Thursday April 25th. Please come out and support.

Mayor Rob Ford has proclaimed the April 21 – 28, 2013 as “Organ and Tissue Donation Awareness Week” in the City of Toronto. This week promotes the life-saving impact of being a donor and raises awareness about the importance of having up-to-date donor information. The theme of this year’s campaign, “Retire Your Donor Card,” encourages everyone to register online at BeADonor.ca or visit a local ServiceOntario centre to ensure your donor information is current and available when needed.